While fishing on Lake Ontario, you will be catching primarily Salmon and Trout. We use controlled depth techniques with downriggers to target specific water temperatures and sonar readings where the fish are.

Our twin engine 50′ Trojan Sportfish has over 700 HP to make sure you get to the hot spots safely.

Our top of the line electronics and experience will help locate the “strike zone” on Lake Ontario and provide you with an un-forgettable fishing experience !

Here are the hard hitting fish species you will encounter in Lake Ontario:

Chinook salmon are anadromous (migrate into streams to spawn) and semelparous (produce all offspring at once and die after spawning). Lake Ontario chinook spawn in the fall. The growth rate of the species is rapid, and individuals usually reach sexually maturity within the first three to five years. 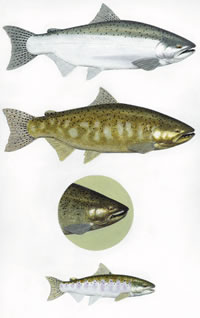 Chinook salmon, like most Pacific salmon, have a homing ability, and return to their hatching location to spawn. This makes for remarkable fall salmon spawning runs at the Credit River in Port Credit Mississauga, right where our boat is docked!

These hard hitting fish are well known for taking hundereds of feet of line and smoking the drags on reels ! If you hook into a trophy size chinook (or King as they are known in the USA), hang on tight you are in for a great fight!!

The coho salmon is another major Pacific salmon sportfish stocked in Lake Ontario. The coho appears similar to the chinook but smaller. Coho salmon usually have spots only on the upper lobe of the tail fin. Both species have metallic blue or green dorsal pigmentation that fades to a shiny silver on the ventral underside of the body. This colour fades dramatically during the spawning season, when the entire body turns a deep blue or black, and the fish actually start to decay near the end of the spawn, before finally perishing. 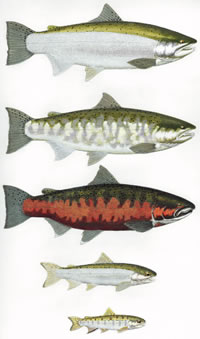 Coho and chinook salmon feed on a variety of insects, cladocerans, and small fish. Large salmon prey almost exclusively on alewife and rainbow smelt in the lake.

Hooking into a Coho is something special. We call them “crazy” cohos because their fight is unpredictable. They often surface quickly after diving in zig zag patterns and will often jump out of the water.

Like Pacific salmon, Atlantic salmon are usually anadromous — their eggs hatch in streams, the juveniles migrate to the ocean (usually after 2-3 years) to grow and mature, and the adults return to streams to spawn. ‘Landlocked’ describes Atlantic salmon that complete their life cycle entirely in fresh water, using large lakes as surrogate ocean feeding grounds. Historians and biologists in the late 1800s debated whether native salmon in New York and Ontario were once anadromous. Unlike Pacific salmon, Atlantic salmon do not die when they finish spawning for the first time. They may spawn several times throughout their lives. 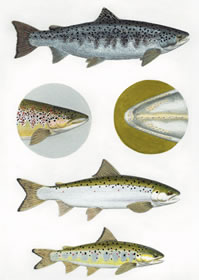 The species is distributed along the northern coasts of the Atlantic. As mentioned, Atlantic salmon were native to Lake Ontario, but were extirpated in the 1890s by human-induced disturbances. 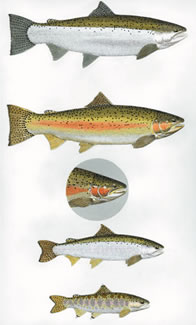 “Bows” are probably the most visually exciting fish to catch on Lake Ontario with their dazzling jumps and “tail walks”. They will challenge even the most experienced anglers with their acrobatics!

Why Fish with Us?

WE ARE FULL TIME FISHERMEN

#sundaybowday Leave no one behind....